This morning while walking to our ASA office, I passed a new mural in the making. Of course, as a street artist myself, this took my attention. A portrait of a girl. With on the background the colors of the German flag. But upon looking closer this wasn´t just a girl. It was Anne Frank. The girl who´s diary about her life during the Second World War has sold over a billion copies worldwide. She, in the Netherlands, is the face of the Second World War and nowadays her previous house is unfortunately a big tourist attraction. Her portrait is now being paint behind a fence. On a wall that is known by the locals as a bunker. I was shocked. Of course, we at ASA are a strong believer and advocates for all art on the street. But this image for me just didn´t seem right. When I arrived at our office and showed the mural to my colleagues, they felt the same. 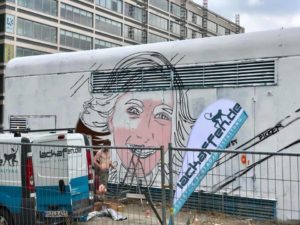 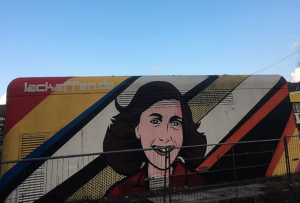 I called the HVA (Hoge school van Amsterdam). The mural is on their property and they gave permission. How could they agree with such a controversial concept? I wondered specially because I found out that the mural was initiated by lackaffen.de, a graffiti crew from Germany. Everyone knows that such subjects are sensitive. They told me that lackaffen.de contacted the HVA themselves to paint the wall, that was formerly used for school projects but now is planned to be demolished, free of charge. The only condition the crew had was that they wanted to paint Anne Frank.. on both sides. HVA doesn’t take a stance on the subject nor the mural which, in my opinion, is a shame. Later I read an article on https://hvana.nl where HVA does a stance and even says `Anne Frank is always fun´. So in contrast what they tell me, they do have an opinion.

The wall could´ve be designated as a legal graffiti spot, the students could do a mural or local artists could combine a workshop/mural project revolving around street-art in combination with the history of HVA or Amsterdam. They could´ve done anything with that wall. So why a portrait of Anne Frank where she´s put behind a fence, again?
Besides that, Amsterdam already has a giant mural of Anne Frank and let’s be honest it’s a cheap subject. A pop-art Anne Frank.. with an “explosion” background isn’t something the city needs or contributes to the history. Now Amsterdam has the beautiful opportunity to look at two new Anne Frank portraits. But hey, good for the artists to get their art out there which is something we do support. But we don’t support the subject they chose. And as seen on twitter we´re not the only one: 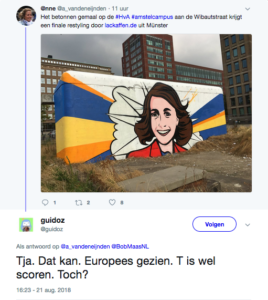