Icy & Sot. Two brothers. Two artists. Two freedom fighters. Born in Iran but banned by their own country because of their controversial art. Art that´s not only controversial but also gives food for thought. Works that are not only perfectly detailed, executed in serene colors, but also let you look into the souls, the emotions, through the eyes of the figures who are pictured. The exhibition gives you the feeling that you can not only feel the pain the brothers might have due to the regime in their country, but the pain of all of the inhabitants who have to suffer.

Icy & Sot are bravely mentioned ´The Banksy of Iran´. But that almost feels like an injustice. Of course, their work has some comparisons. The political charge, working with stencils. Yes, both artists make art that opens your eyes, let you see certain issues from a different angle. But where Banksy´s work is clearly a reaction on the Western society, the brothers put a lot more emotional and personal issues into their paintings. Most of the works feel like they are made to project everyone who feels dishonesty about how their government behaves against their inhabitants. Governments who let children, women, and men consciously suffer. 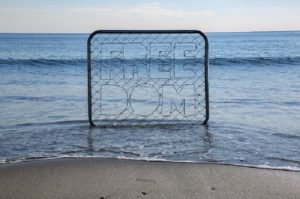 Freedom is clearly a present subject in their work and specifically this exhibition. When entering the first room of Icy & Sot´s show several works doom up, a few in particular that immediately stand out. Icy & Sot do not only make art on canvas but also have a stunning series of works made out of fences. Fences cultivated into a shout out for freedom. The first one obvious placed next to the entrance of the show. Both the fence itself as the cultivated fence standing in front of the sea as seen on a moving image on a television screen. The word ´Freedom´ is forced into the metal of the fence. Freedom cannot be overlooked. But the work that actually immediately catches my eye shows a veiled woman, while her eyes reach my soul, I almost hear the screams, the panic, of the people pictured on her veil. It is as if you´re looking at the woman and looking through her eyes at the same time. 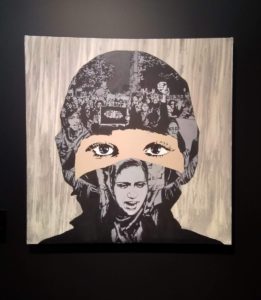 Another work that attracts attention shows children standing, smiling, in a colorful rain. It looks like the look of relief. The work is strengthened by the surrounding wallpaper. The rain doesn´t come from the work, it come´s out of the ceiling.
The exhibition continues and one after the other image shows up. Even photography is represented, between sculptures and other fence art. But most of all there are children and what it seems other war victims, opening up to the viewer, touching their souls.
After I´ve finished the exhibition, I return once again to the first room. The work opposite of the women with the veil shows an elegant figure. Her hair consists of birds. I hope it´s the women with the veil, who has found her freedom. 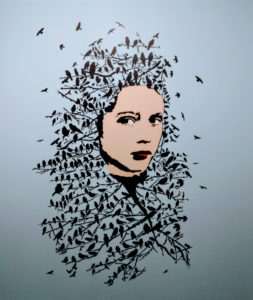 signalling a great migration towards freedom.”