“LA PLAZA ES NUESTRA” (The square is ours) A Brilliant new mural from Escif in Mural de la Salut, Sant Feliu de Llobregat (Barcelona, Spain).
“In May of 1977, the residents of the neighborhood of La Salud managed to stop the construction of a gas station. The walls tell that it was one dawn, while the city was still sleeping, that some brave men decided to push the concrete mixer into the hole where they were going to build foundations. They covered the hole with dirt and planted a tree. Legend tells that if a tree is planted in a busy lot, nobody will be able to remove it. And that is how they grounded the square that still remains today, theirs the neighbours of Sant Feliu” (Escif)
This is the description given by Escif, the artist chosen to transfer the historic memory, present time and hopes of a town that, 40 years ago and under Franco’s regime, started a fight to have a decent and worthy neighbourhood, to gain ownership of their square. 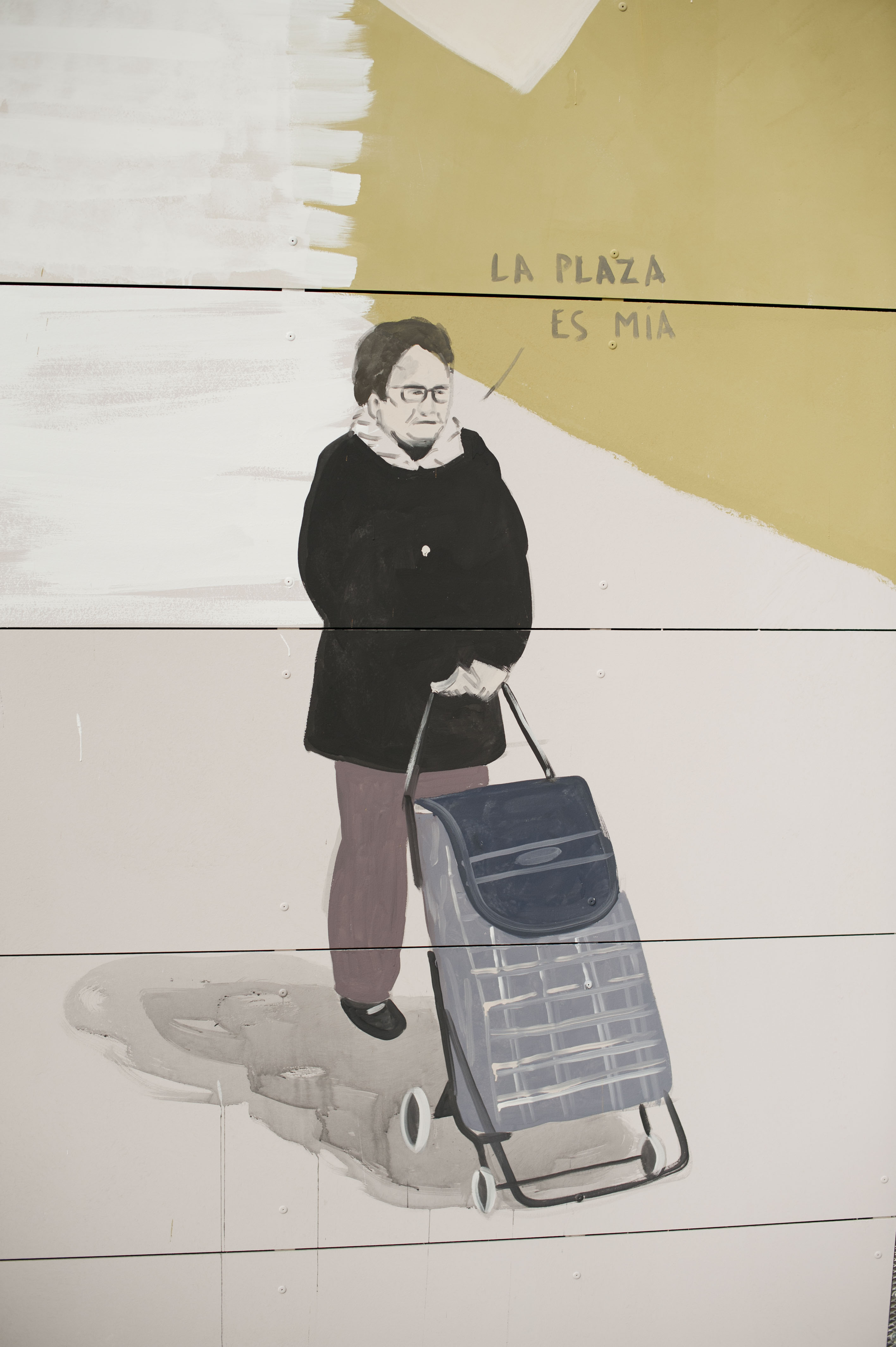 Escif, an artist and activist who never gives any interviews, lived with high intensity during this year-long participatory project. What initially was a proposal to create a mural turned into a work to transfer historic memory and, above all, a work of deep love. Because, at the end of the day, creating art means creating life. And at that place, there were many lives to remember, many stories to be told, many stories yet to come.
That’s the legacy of a surprising mural that’s full of details and anecdotes, and that the neighbours have already taken hold of. “La plaza es mía” [The square is mine,] “Yo-Tu” [Me-You,] “Fue él” [It was him,] “DEP hormigonera” [RIP concrete mixer] (an ironic reminder of the time when the neighbours threw the concrete mixer into a hole, where it still remains buried,) “No callarem” [We won’t remain silent]… The wall tells, narrates, and remembers many lives and stories that go back to 40 years ago, many conversations in this square conquered by the neighbours, many yearnings and dreams, many fights that are yet to come.
This new work by Escif comes a few weeks after having painted a façade of the famous Palais de Tokyo (Paris), in memory of the events of May 1968, with sentences such as “Be young and remain silent.”
In Sant Feliu nobody remained silent.
Today, in a time of so much repression, Escif reminds us that we have to fight, always.
“La pared es nuestra” [The Wall is Ours] is a retaining wall that rescues the voices of those who are gone, that keeps the voice of those who remain, and that suggests the voice of those who are yet to come. An inclusive wall made by and for the neighbours. A wall that can be heard, that contains the sounds of the neighbourhood, of its history, and of its inhabitants. A wall that can be read, and that has as many readings as visitors who come to contemplate it.” (Escif) 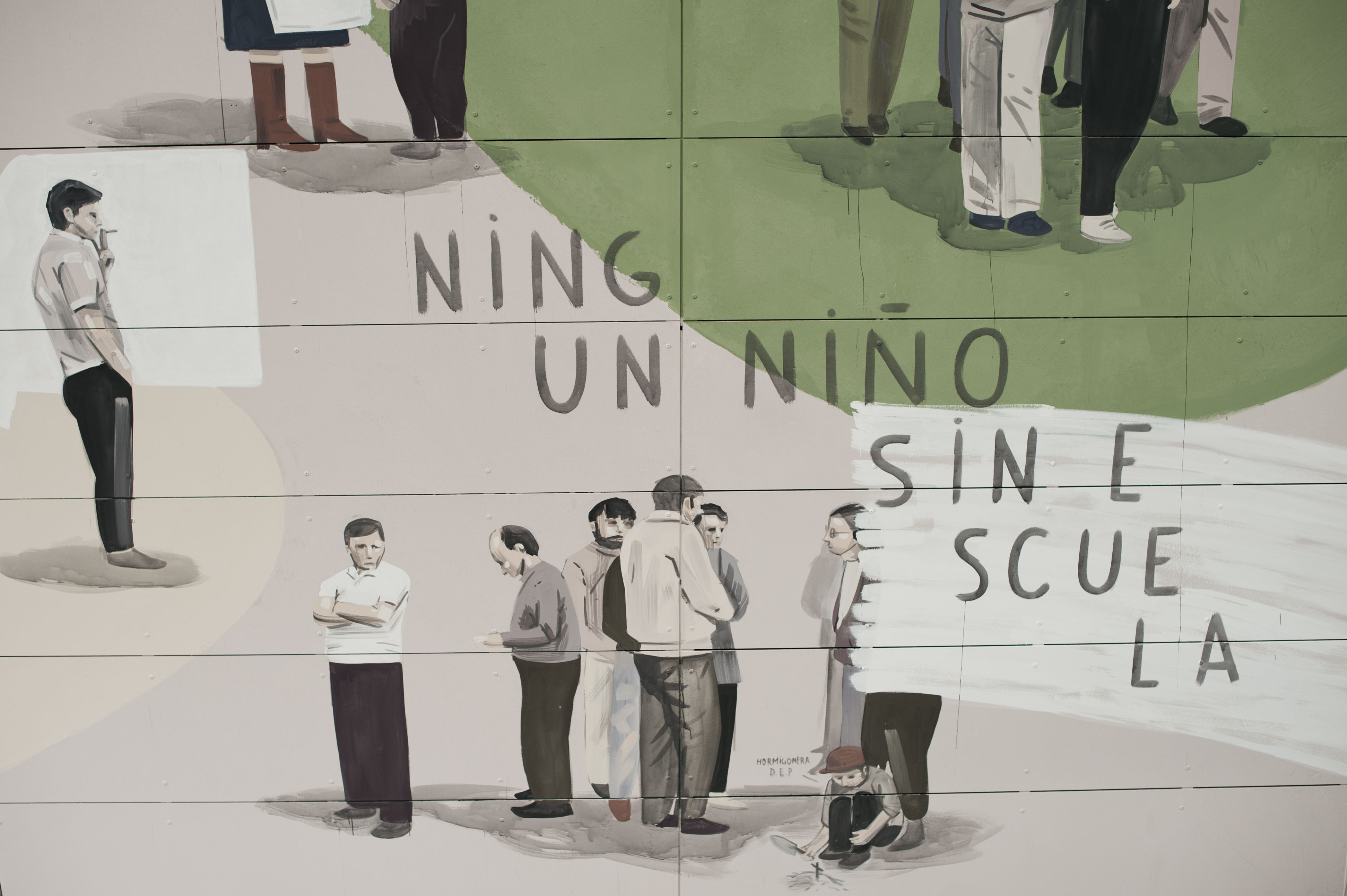 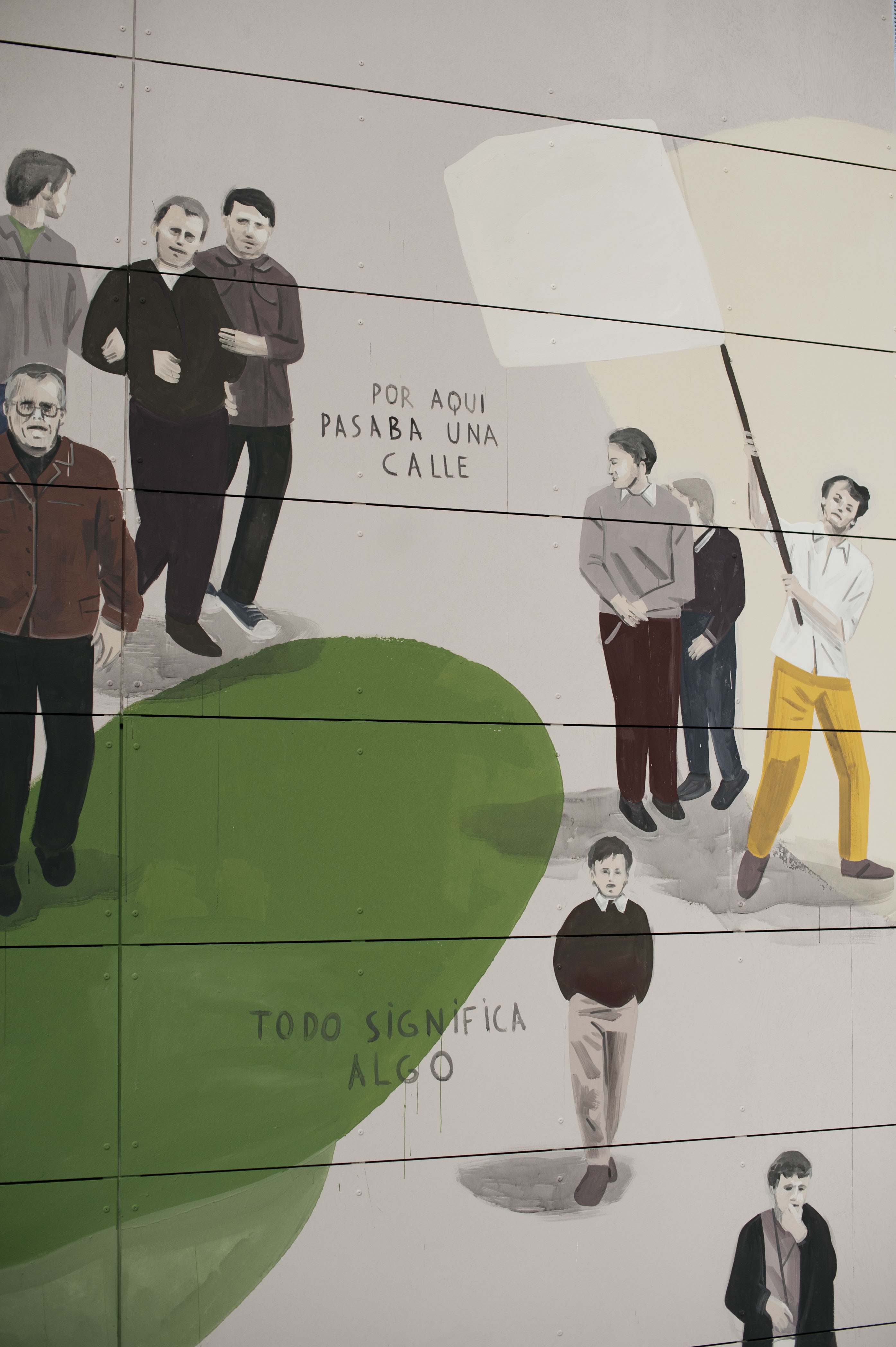 About the international open call:
300 artists or collectives applied to the open call launched by the City Council of Sant Feliu, Kaligrafics and Contorno Urbano.
This intervention is part of the full remodeling of the Plaza de la Salut, an important square for the history of the city. The mural will represent the neighbours’ fight 30 years ago to have this square created instead of a gas station.
Kaligrafics:
Organization founded in 1999, it’s the oldest non-profit dedicated to graffiti and street art in Cataluña, and has one of the largest experience in Spain.
Kaligrafics transformed the city of Sant Feliu in the city in Barcelona area most filled with urban art .The team has a great experience in managing medium and big size walls in dozens of cities from the Barcelona area. https://www.facebook.com/kaligrafics https://www.instagram.com/kaligrafics/
Contorno Urbano:
Contorno Urbano is the first Foundation in Spain to be fully dedicated to street art and graffiti. The team has over 10 years’ experience in murals and urban art dissemination, as well as having worked on international projects.
SaveSave