Keith Haring Mural in Paris Restored: Amsterdam is Next!

7 September 2017 was a day of celebrations in Paris! The city revealed the newly restored Keith Haring mural, a colorful spectacle on a 88.5 foot (27 m) high column that used to house the stairwell of the Necker Children’s Hospital in the 15th arrondisement. Mick la Rock (Aileen Middel) and Vroom &Varossieau were invited to partake in all the festivities. 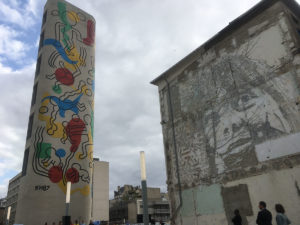 The mural was originally done by Keith Haring and his partner Juan Rivera in 1987 and with it’s vibrant colors and shapes Haring hoped to brighten the days of the sick children at the hospital.
In 2011, the hospital underwent several renovations and planned new builds as well as the demolition of some of it’s buildings. Back then it wasn’t sure if the Haring mural would survive all of this or even could be restored. The mural was in bad shape and had suffered from being exposed to the elements for such a long time. However, gallerist Jérôme de Noirmont and the Keith Haring Foundation got together to raise funds for the restoration and eventually succeeded at making it happen. Will Shank and Antonio Rava, widely known as the Haring mural experts, restored the beautiful mural called “Tower” to it’s former glory.
The mural will now be at the heart of a 97 square foot garden and will hopefully bring joy to many more generations of kids in the Necker Children’s Hospital! Keith Haring Mural in Amsterdam
The next mural the Keith Haring foundation hopes to see restored, is the painting that Keith made at de Jan van Galenstraat in Amsterdam. One of the last remaining outdoor murals by the artist. In 2015 the Keith Haring Foundation approached Mick la Rock, who at the time was curating a exhibition about graffiti in the Amsterdam Museum. Mick la Rock, an acclaimed graffiti artist in her own right has been a big Keith Haring fan for as long as she can remember. Excited about the idea and the possibilities, in looking for a partner on this project, she contacted Vroom &Varossieau gallery, who immediately shared her enthusiasm. As a team they have made the first steps towards preserving the mural. Similar to the situation with the Paris mural nine years ago, when the mural was in a deplorable state and threatened, it is still uncertain if the Amsterdam mural will survive at all. Right now, Mick la Rock and Vroom &Varossieau are in ongoing talks with all parties involved to insure that this amazing artwork will be saved for later generations and the city of Amsterdam. 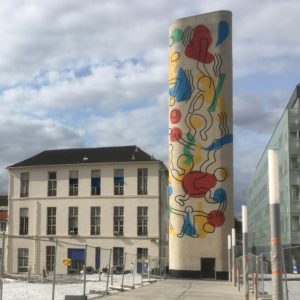 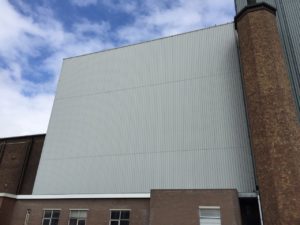