You know this feeling of having no expectations on something and then getting surprised by how good reality is? That’s exactly what happened to me when I travelled to Morocco and I learned the real beauty behind stereotypes.

You would think that due to their orthodox traditions related to religion, this country wouldn’t be big on the Street Art topic, but you are completely wrong. Something that I’ve noticed as I walk through the streets of the World is that oppression, injustice and inconformity is represented on the walls through Street Art, Graffiti and Muralism. Morocco is no exception. The artwork I got to see was mainly portraits. It reflected the realness of people behind all stereotypes and the true beauty of day-to-day fighters.

One of the coolest and most random experiences I had during my trip was meeting a graffiti artist from Perú. His name is Andes. He is part of a crew called Lima Love. After a few beers, we went to look for a place to have dinner. As we were walking, Andes took some spray cans out of nowhere and started painting his tag on a wall. My first thought was that Morocco would be one of the last places I would decide to do graffiti. I’ve heard rumors of people getting their hands cut off for things like this. I felt a lot of adrenaline witnessing this and couldn’t even imagine what Andes was feeling. After three long minutes, I took some pictures and we left the place. As I made my way through cities like Marrakech, Fez and Rabat, I kept on seeing tags from Andes. I even bumped into his work in Portugal, but that’s another story. 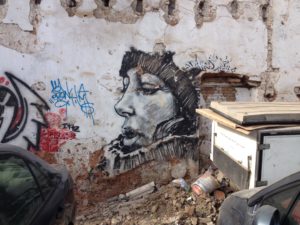 The city I was most impressed on visiting is Chefchaouen, also known as “The Blue City”. This small city is built on top of a hill and is covered in blue paint. People told me they started doing this hundreds of years ago to make the city look like the sky. I also heard they do this now a days as a mosquito- repellent method. Whichever is the reason, I can assure you this is one of the biggest and most amazing art pieces I have ever experienced. I believe Street Art has no limits, and Chefchaouen is the perfect example of it. 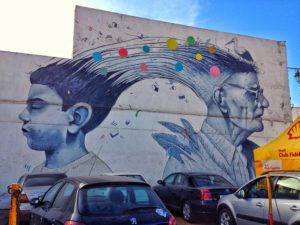 Going to Morocco changed the way I perceive my personal problems and it also broke all stereotypes I had about the country. People express through Street Art, Graffiti and Muralism just as any other culture. They are fighting to break with the status quo and improve people’s lives with their message.
Written by strawberrystreets.com