Visiting buildings that have a lot of history behind them is something that I’ve always been very attracted to. Knowing that it revived from the ashes is even more interesting. If you ever plan on traveling to Madrid, going to La Tabacalera is a must.

Built between 1780 and 1792, this building was a tobacco factory until the end of the 20th century. Now the building is modified to two buildings: one is focused on contemporary art and the other is a space where the real magic happens.
The building is adapted for refugees from all around the world. There are workshops and hundreds of walls artists can intervent. It may look like a chaotic place where anyone can get inside and paint on a wall, but that’s not the case. There’s an organization called Keller that self-manages the space and decides who can intervene in its various walls. This astonishing oasis in the middle of the city will transport you to one of the most underground areas in Madrid. Tunnels covered with Street Art and a very nice terrace were people sit on the floor and drink a beer or two, are just a few reasons why this place is so special.

Artist like Liqen, Borondo, Hopare, Animalitoland, Cranio and many more have passed through La Tabacalera and left a special surprise. Keller protects many of the murals and they are now considered heritage of the cultural center. Making the murals permanent artworks. The other murals are left there for a few months and then a new artist intervenes with his/her work. 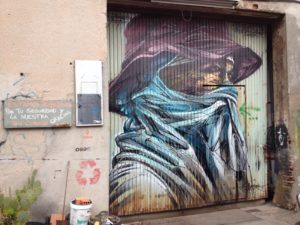 Last June I had the opportunity, through my collective Strawberry Streets, to manage a space for an artist called Trepo Parker. He is from my hometown Guadalajara, Mexico. Knowing I was promoting Mexican talent in a mystical place like La Tabacalera, made the experience even better. The piece, inspired on a sculpture called “The Fallen Angel” is located inside El Retiro Park, in Madrid. That work of art may disappear from the wall in no time, but it will remain in my memory as long as I stand. 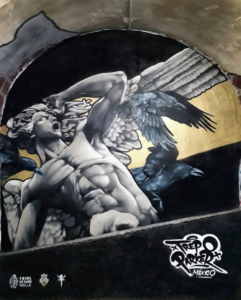 La Tabacalera will show you a side of Madrid not everyone gets to see. I hope you can get to enjoy it the way I did.
written by Andres Olazabal