It’s a wrap! For months we’ve worked on our show pony: The Street Art Awards. This year we went bigger and better, hosting the third edition for the first time in Rotterdam and including neighboring countries Belgium and Luxembourg. We look back with pride on Sunday 16th September last, when all the hard work finally came together. We would like to take this opportunity to thank everyone who joined us and to give some more information about our intentions with this award show.

The idea for the awards started years ago as a joke. But soon we realized it could turn in to something very serious. Of course, everything always with a smile, but ASA was originated to give a platform and a stage to street art artists and their work. Why not taking this mission to a next level by creating a literal stage? Keeping in mind, that even though we promote street art world wide, we needed to limit the Awards to the Netherlands and now to the Benelux. But also keeping in mind that however we never want to count out anyone, it might would be a mission impossible to please everyone. There are so many respected but also unknown street art artists, it seems like a challenge to give that stage to everyone at the same time. We’re dependent on artists and their followers and fans who submit their work. The Awards are actually not so much a need to point out who is the `best´. We understand that the `best´ is always restricted. A snapshot and an opinion. The Awards are about giving the artists the stage and credits they deserve. But the Awards are even more about letting the world know about the existence of street art and introducing this art form that deserves a lot more appreciation. So hereby a big shout out to everyone who helped, joined, and showed their love for our mission! Not only during the Awards but also since ASA was founded in 2010.

We also like to take this opportunity to inform you about the following: we noticed that not everyone knows the story behind ASA and our intentions. That’s no problem, we’re happy to explain:
ASA was founded in 2010. Born from a passion for street art and more as a hobby then a business. Now, 8 years later, we’re proud to have over 400.000 followers on Facebook, 20.000 on Instagram and 18.000 individual visitors per month on our website. ASA’s main goal was, is and always will be to promote street art and street art related activities. We want to give a stage, a platform, a shout out to amazing artists and their dope art works. We do this for free. No one ever has to do anything for ASA, except making a nice art work or create a cool concept. There are people who sent in art work or alert us to a new mural and then we post something about it. ASA was founded as a non-profit foundation and still is. We do have projects, for example for the Municipality of Amsterdam, clothing brands, schools and street art organizations from other countries but the basis remains: our platform is for free. Even our biggest event, the Awards, is a gift from us to the scene. The Awards are a collaboration between ASA, Boomerang Agency and Digital Enterprises. The collaborations are needed because without them we wouldn´t have the possibilities to host such a big event and create a voting app. Without us, they don’t have the knowledge about street art and our street art contacts. We need sponsors so you can enjoy a beer but also so we can give the award winners a very cool prize that can help them improve their careers even more. We couldn’t do that on our own, because everything we earn needs to go back in to the foundation to keep on growing an continue to promote street art. So when talking about the Awards, we really need collaborations because without them and each other, organizing an award show would not be possible. Just as it would not be possible if we didn´t had so much support from all street art lovers and our followers. So again, thanks for understanding and don’t forget to submit your or someone else’s art if you care about the scene. 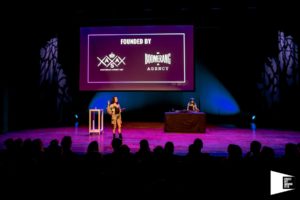