Hot on the heels of last week’s interview with Italian artist Zed1, we are delighted to share this interview with his manager, gallery owner and curator – Matteo Bidini.

Hi Matteo how are you? Tell us a little about yourself…
All good, thank you. I’m here with Gianluca Milli, the second owner of the Street Levels Gallery. We’ve been pretty busy over the last few weeks. We’ve been renovating the spaces and building up a new creative hub for the artists to work in.
You run the Street Levels Gallery in Florence. Can you tell us a little bit about the project and how it came about?
Five years ago, Gianluca and I have founded a cultural association named Progeas Family, the name being the acronym of the university we both attended.
Since then, we’ve been taking care of urban art related projects and musical events around the city. Two years ago, we decided to get together with some friends that had a business premises used as an art lab, and opened the first urban art gallery in Florence. We meant it to be a contemporary new space, an information point inside the birthplace of Renaissance. Through the association and its activities, we want to attract the interest of those who don’t know enough about urban art and are curious about it.
What do you aim to achieve with the gallery space?
We’re aiming for many things, actually. First of all, we like to see our gallery as a happy place in which people can freely express their ideas and achieve their goals. We wanted to build a space dedicated to people, a meeting point of cultural exchange. Where the creative minds can bring their passions together and get involved in a safe area that greets their ideas instead of cutting them off.  Not only them, though. The gallery aims to be an information point for everyone, especially those who are still reluctant to this form of art, so they can understand better what we’re trying to do here. 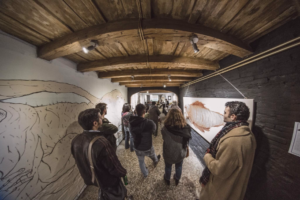 There’s a close-minded component in the institutional structure, in the form of decorum associations specifically built to erase our artists’ artworks by painting them over. Sometimes even using a different colour paint than those of the walls they’re covering. So, is this decorum? We’ve already answered ourselves the question. After all, we know that’s all part of the game.
On a similar theme, what do you think of the street art scene in Italy as whole? There seems to be a never ending stream of street art festivals in Italy over the last couple of years. Do you see this is a positive or do you feel that there are drawbacks to having so many festivals?
The Italian street art landscape is rich now and counts some great artists who are emerging in the international scene, too. As everywhere else in the world, though, next to the great artists who make themselves promoters of strong and potent messages, simultaneously some others get born riding the overall trend, painting big giant walls that devoid the substance. In the same way, there exist many festivals whose main goal is to invite artists to paint meaningful walls. Giving the artists a power that can’t be reached with decoration alone. Italy has seen many festivals growing and other street art related promoting activities. Personally, I prefer only those events which work the whole subject from the inside. So not only scouting artists to have their walls painted, but also including the whole social structure in the process. And understanding they’re going to be the end-users, the real beneficiaries.
You are also part of the Veregra street festival in Montegranaro which is in it’s twentieth (20th) year now? How did you come to be part of this festival and what is your role there?
Veregra Street Festival is at its twentieth edition, that’s right, but we actually don’t work within it. As Matteo Bidini, I am the manager of the artist Zed1, as well as the gallery, which is his main reference point.


Zed1’s new mural for the festival is an absolute joy. What was the thinking behind inviting Zed1 to paint at the event?
As I said, we strictly work for the artist, not the festival itself. The Veregra Street Festival is a great fair, though. Zed1 decided to pay homage to it by painting marionette-like characters that remind us of the Montegranaro’s street performers.
Thank you so much for your time Matteo, we really appreciate it!
Don’t forget to check out the Street Level Gallery website and Facebook to keep up to date!