People tend to forget that great artists had to put in countless of hours and dedication to master their craft and skill so that we can enjoy their artwork. In Amsterdam Street Art’s latest blog series:”My life in pieces”, we’re taking a deep-dive into the artist’s portfolio and ask them which art pieces have a significant meaning for them and their career.Today we’re meeting up with NYC street-artist Ratanics.

Ratanics first discovered his love for art in his early teens. At that time, he was really influenced by the anarchist zines and music coming from the punk scene. He took up a job at a screenprinting studio and printed a lot of simple punk and anarchist logos. All of those logos were either drawn by hand or cut out and pasted as a collage. Reflecting back on that era he said; “I was a wizard on a copy machine”. After dabbling with a job in an unrelated field of work due to a burn-out he found his passion again when he picked up drawing. One of the first images was the Ratanic image, which started out as somewhat of a joke. “I think that it is important to have humor, fun and not be extremely serious. It keeps my creativity peaked and my art more relatable to people”.

Ratanic Army logo: This is the logo that started it all. It was a major process and it set the tone for my style and my work–first drawn in a sketchbook, then manipulated in a copy shop, cleaned up on a computer, then printed or stenciled, and finally pasted up on a wall or stuck to some other public fixture. I didn’t have computer skills when I first drew it so it was very laborious to do the circles and the letters. I basically made it from hand and then fixed it up on a copy machine. I bought a screen printing kit and printed hundreds on my own. This is probably my most widely circulated image, printed on t-shirts as well as thousands of stickers and hundreds of posters. 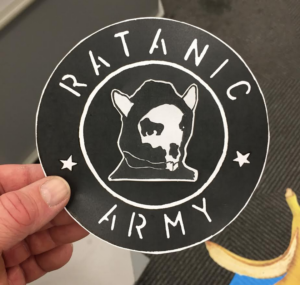 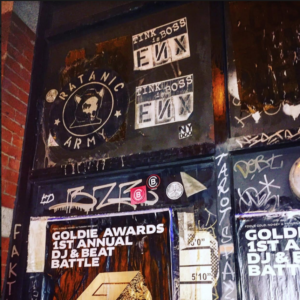 Villain Ratanic: With my new computer skills, I created a new face for Ratanic in photoshop then added the body of a famous cartoon villain. I mean, straight up stole the body. But it works. I’ve printed this image on stickers and posters and it has become one of my most popular pieces primarily wheat-pasted on walls everywhere. This has given the face a character and a personality.

Paintings: About a decade ago my primary form of art was painting-mainly oil painting. It was all I did. After a long hiatus from creating art, I wanted to paint. But then I found the process of making street art to be so consuming, so satisfying from start to finish. It also taught me simplicity, made me less uptight about what was going on in the image. So when the weather got bad and I couldn’t really go out and paste in the streets I began painting again. Only this time instead of human figures, it was Ratanic. And it helped to further shape the story of Ratanic and his dark world. 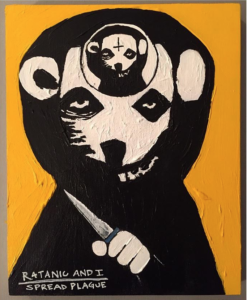 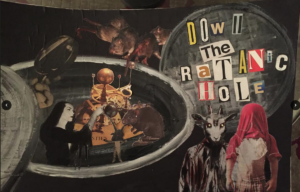 My life in pieces: Mikael B