People tend to forget that great artists had to put in countless of hours and dedication to master their craft and skill so that we can enjoy their artwork. In Amsterdam Street Art’s latest blog series:”My life in pieces”, we’re taking a deep-dive into the artist’s portfolio and ask them which art pieces have a significant meaning for them and their career. Today we’re meeting up with graffiti and tattoo artist; Thomas Acid.

Thomas Acid (28) is a professional tattoo artist and graphic designer, who works in the abstract- and modern-era of tattooing. He started his tattoo career in 2008 and opened his own shop in 2012 named ACID Tattoo. From the start, Thomas adhered to his own style exclusively which is inspired by graphic- and digital-art derived back from his graffiti. These days people from all over the world visit Thomas to wear his work for a life time. He also travels to the UK and Germany frequently to create.
ACID Tattoo is located in Alkmaar, The Netherlands (near Amsterdam).

This project has multiple tattoos which come together due to the recognizable signature style featured in every piece of work. The chaotic and heavy nature of this tattoo as a whole combined with the areas of empty skin, make the tattoo easy to read overall.  The typographical work shown has rejected all of its basic rules when it comes to lettering, and in return, it became an expression of emotional value. The face is without feeling, numb towards its onlooker, but we all know that’s a facade. The arm turned into a patchwork of different feelings and expressions while covering up many, many scars. (Photo made by Loeka Horsman) 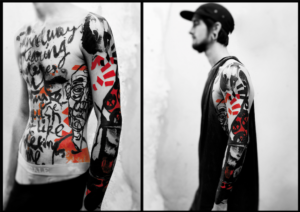 The tattoo represents a personal, chaotic battle using stencil typography and only a few open areas while maintaining balance. The client is a very close-call survivor of the terrorist attacks in Bruxelles Airport, back in 2016. The tattoo shows the positive life after the attacks; It incorporates his children as the main theme, included with a piece of self-written poetry, the reason he is moving forward. 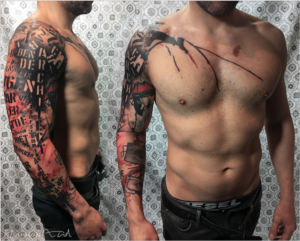 This tattoo has proven above all to be an effective way to cover up past mistakes. The clever use of negative space previously available on the arm has allowed for a ghost-like portrait to appear. All the rest of the arm is made black, and the negative space eventually got tattooed with white pigment to push against the black pigment as a barricade, an effective way to keep every detail in the years to come. 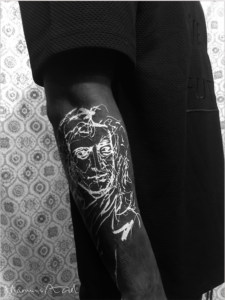 The tattoo’s main focus lies within a cubism style execution, while showing texture and movement on the arm. And even though there is no recognizable image or pattern, the balance and placement of all shapes present are perfectly in line with the emotional aspect which the client wanted the tattoo to represent. (photo made by Loeka Horsman)

Mina Hamada, the poetry of colors