I was riding my bicycle this morning through town and saw the new poster campaign of the MOCO museum. The famous stencil artwork of Banksy, the “Kissing Cops” with the rainbow flag behind them. It’s almost there, Gay Pride 2018. The city will be transformed into one giant colour spectacle with awesome events popping up on the weirdest times and in the weirdest places. 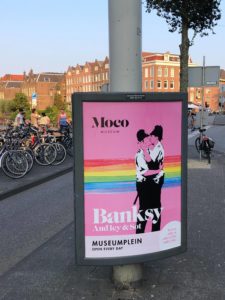 The combination of the “Kissing Cops” and the rainbow flag reminded me of something two years ago when Amsterdam wasn’t yet veiled in the MOCO pink. Beurs of Berlage organized a giant exhibit together with Steve Lazaridas/ New Brand Expo, filled with Banksy artworks that were made available by art collectors. Amsterdam Street Art was intimately involved with the exhibit at the time and during the run-up, there were several playful promotional activities set up. A high-profile part of this campaign where the living artworks of Banksy. You had the “Girl with the balloon” near Westertoren, “Pulp Fiction” on the Dam-square and also the “Kissing Cops” on the Museum-square. These actions were streamed live throughout the Amsterdam Street Art Page. 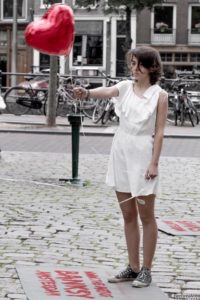 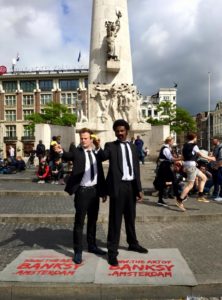 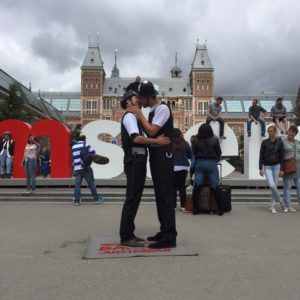 Especially “Kissing Cops”, two dressed up English cops standing in front of the IAMsterdam letters near the Rijksmuseum, gave the tourists an insight and unique experience of the Amsterdam tolerance. These two “cops” took their role quiet serious for twenty minutes and the comments on ASA’s live-stream came pouring in. Ridiculous!, Great!, Haha typical Amsterdam… A few negative reactions but for positive for the most part. That’s okay. This is Amsterdam, we are equal here and we do what makes us feel good. Sadly not a realistic image but still an important point that many “Amsterdammers” strive to achieve throughout the years. Personally, I’m a big fan of those who distinguish themselves, have the courage and don’t give a damn about what other people think. These people are making Amsterdam feel like Amsterdam and they are the living artworks that we should cherish.
After our live-video gone viral and every opinion was received, typed by a stranger safely from behind a computer screen, we got hit from an unexpected direction. A personal message from Facebook with the announcement that our content featured pornographic images of minors and that our page would be set on non-active. Yep, this was our WOW… WTF? moment. With almost a half a million followers we are well aware that our posts are all in place within the Facebook terms and we make sure that everyone handles those terms. After an elaborate motivation letter where we explained the concept, the location and ( perhaps the most important fact) that we are a street-art platform that promotes art in public spaces, we received no response. 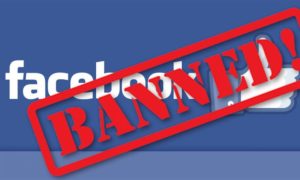 After this incident got picked-up by the media and a correspondence with Facebook the video resurfaced online again. We received an excuse of some sorts but an explanation was never given. 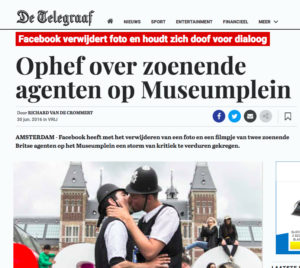 Here is the video again, feel free to express your opinion but be nice to each other for a change. Respect everyone’s choice and let people be who they want to be. Artists, keep on doing what you´re doing, use your freedom of expression and give the city colour!!!

ASA is selling exclusive print of Beazarility’s work, if you are interested in purchasing one of these prints send an e-mail to: lars@amsterdamstreetart.com 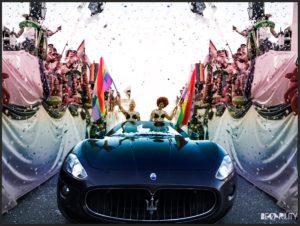 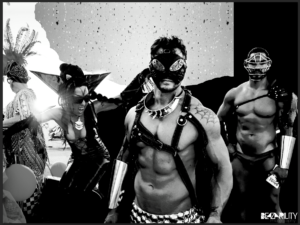 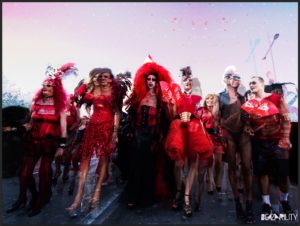