On this, the first t-shirt- friendly Amsterdam Saturday of the year, with everyone in full Spring revival and the terraces packed, I find myself waiting for “The King of Graffiti” at gallery Vroom & Varossieau. A good opportunity to get out of the sun and preview the exhibited work with Aileen Middel aka Micklarock01 as my insightful guide. From oldskool tags on New York subway maps, via large canvasses where pieces and abstract forms have been combined, to completely abstract works… it’s unmistakable: after some 45 years as a graffiti artist, this man has the sort of full-fledged oeuvre a starting artist can only dream of. When Blade arrives, after a quick hello, The King decides to get into the groove of the exhibition launch by creating an impromptu piece on one of the walls of the gallery, all the while joking around. All done twenty minutes later, we sit down for our talk.

You started writing graffiti at a very young age, in a period when there was not really a huge street art culture yet. Did you immediately feel that you were at the beginning of something very special?

It was a fun period! We were a bunch of teenagers making pieces on trains in the dark at night, beingvery quiet while doing it. And trying not to get busted. All graffiti artists have great chase stories you know, haha. And the very special thing is it has all been documented in photographs.

Those years, the 70s and 80s, in which you started out in the Bronx; do you think that period in New York is now over-romanticized, or does it present viewers (of documentaries and Netflix series) with a more or less realistic picture of that era?

With graffiti writing, we tried to escape the fear. I lived in the Bronx, which lost so many of its buildings to arson and abandonment between 1970 and 1980. (CC: Large numbers of tenements and multi-story, multi-family apartment buildings, left vacant by white flight, sat abandoned and unused for long periods of time.)

You started in an era where graffiti was associated with vandalism; did you make your first pieces out of protest, self-expression, or was it something else?

It was really a fun thing to do, an act of self-expression. Trying to escape the fear you had these days (fear of the government or landlords burning down your house) and letting the world know you were there.

Do you remember writing your first tags, and were they immediately good?

We learned along the way, had a lot of practice, and at the end, I painted more than 5.000 trains. Top to bottom, windows and all. When you look at the trains on the photo’s I took with my friends, you see the wet paint on the glass.

How long did it take to create a huge painting on a train?

About ten hours! And we had the energy for it! We did it on Friday night from about midnight till seven, eight in the morning, mostly in tunnels. We were doing that hoping the police wouldn’t come.

You were one of the original members of The Crazy 5-crew. Are you still in touch?

All members are alive today and that is really special. I do see some of them from time to time but we’ve all changed. (CC: Pointing at a picture in the beautiful retrospective volume published about his work, Blade is telling me about one of the crew who went on to win a Pulitzer prize, and that whenever he visits him in his office he first has to go through his secretary. But that when he sees Blade ‘it’s all good’.)

When did you become “The King of Graffiti”?

The day when I started to draw the crown on my work, spring of 1975. 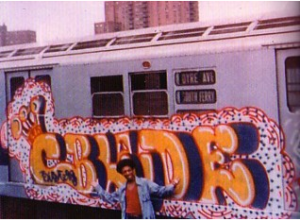 What are your favorite types of paint and colors?

In the 70s, when I still looked like him (CC: points at a picture of a cute guy with an afro), we worked with Red Devil spray paint, but this paint had the lead. All the paints from 1970 to ’76 had lead in the paint; they were very unhealthy. Now I use MTN 94 and I pick the colors intuitively. I have been doing this work for so long I don’t really have to think about it.

You have published a beautiful book about your work. Who made the photographs back in the days?

SEEN (from the crazy 5) did. You know what’s funny; you actually see me doing the writing in the middle of the night.

When did you realize that you might be able to make a living off of it, or in other words: when did your work become more than ‘just’ graffiti?

In the 70s it was all for fun, painting trains. And in the early 80s, I started getting asked for shows in galleries and mostly painted canvasses.

Is this the period Mr. Yaki Kornbilt invited you to Amsterdam?

Yes, Yaki Kornbilt came to New York in 1981 and discovered me and SEEN. We were the last ones he recruited, besides Dondi, Basquiat, Haring, Daze, Crash, Lady Pink, Quick, Zephyr, and Rammellzee. He invited us to Amsterdam, where he had his gallery.

Was it a different experience making work for the gallery? Did you have to make some modifications?

Yes, we were used to making paintings on trains and now we had to make work that fit the walls of the gallery. So we had to work on “small” canvasses of two by two meters. And we had to use a different – better – technique. Now I can make a real painting with spray paint and markers, I could not do that 30 years ago.

What do you remember about this time (1981) in Amsterdam?

I was 25 years old at that time. Yaki paid us 10.000 guilders for 10 paintings and we didn’t spend it wisely, haha: I’m a kid from New York, I haven’t had one dollar my whole life, and now we could afford all the things Amsterdam is famous for.

How did graffiti-writing influence your life?

First I did it all for fun and over the years I met a few people who gave me some really good advice, for example, to stop painting trains, haha. Yaki Kornbilt would scream at me when I wanted to start painting trains again. He told me: “you are 30 years old, you are an old man with a big mustache and want to paint trains again?” The police would be younger than me, haha. And Vincent Vlasblom (manager director) advised me to invest some money, for example in a home in Florida (where I now live).

As “The King of Graffiti” a living legend, what are you most proud of, what achievement?

I am the most proud of the fact that I can make a living from it and that I helped change the course of the art world. It was a poor kids’ vision from the ghetto that made it, into an art revolution.

Your work evolved from writing in bubble letters to 3D-writing and walking letters, all the way to abstract painting today. Can you tell me about your abstract work?

When I sleep I dream in color and when I wake up I want to visualize those dreams on a canvas. I love to put on some music like The Rippingtons, Pat Metheny, Spyro Gyra and then start painting. When people look at my abstract work I want them to feel happy. I don’t paint skulls, spikes or blood. I’m not doing that, I don’t like that.

Which artist(s) do you admire?

There is a guy named “Loomit”. (CC: looks over to Aileen and asks: Where is Loomit from? Aileen: from Munich.) I admire him, he was the first one to take the New York graffiti to do something so different that myself and SEEN, when we all saw it we were like “wow…..he changed it”. I saw him doing something different first.

How do you think young writers should express themselves today?

Is there one question I did not ask you, that you think I should have?

I want to emphasize that the art was created by young people, for young people. More than 10.000 teenagers where painting trains and let everybody know they were out there.

Amsterdam Street Art would like to thank Vroom & Varossieau for the invitation to interview Blade. The exhibit “Icons” featuring Blade, Dondi, Futura 2000, Rammellzee and Richard Hambleton will run until the 8th of May, 2018 in Amsterdam.